On this date (26 November) in 1483, King Richard, having arrived again at Westminster after his months on the road, returned the Great Seal to Chancellor Russell in the Star Chamber. A memorandum of its travels has been printed in Rymer’s Foedera, and in the Calendar of the Close Rolls (1954). The fact that its location and those through whose hands it passed was so minutely recorded, brings home for me the care with which this powerful tool was usually guarded, and makes Rotherham’s handing it over to Queen Elizabeth Woodville even more shocking.

Memorandum, that on 12 October this year, the king sent his letters sealed with the privy seal to John bishop of Lincoln, the chancellor, ordering him on receipt thereof to send the great seal then in his safe custody to the king as speedily as possible. Wherefore the chancellor on Thursday, 16 October, at 11 a.m., in presence of William Kelet a clerk of the chancery, Geoffrey Simeon clerk, Richard Ive, clerk of the crown, and William Nanson, at the Old Temple in the Great Hall there, delivered the great seal enclosed in a white bag and sealed with his signet in the figure of an eagle, to Robert Blakwall, clerk of the chancery, to bear to the king. And he received the same and carried it in a bag to Grantham, where on 19 October at noon in the ‘king’s chamber’ in the hospice of the Angel, in presence of the bishops of Worcester, Durham, Menevia and St. Asaph, of the earls of Northumberland and Huntingdon, Thomas Stanley knight and Thomas Barowe, keeper of the chancery rolls, he delivered the seal to the king. And his highness received the same and caused the bag to be opened, and the seal replaced therein. And he retained the seal in his custody from 19 October to 26 November, and caused writs, commissions and other things due to be sealed therewith. And on the latter date he delivered the seal at Westminster in the Star Chamber to the chancellor, in presence of Thomas archbishop of York and the bishops of Bath and Wells, Durham, St. Asaph and Menevia, John Gunthorpe, keeper of the privy seal, Thomas Barowe aforesaid, John duke of Norfolk, William earl of Arundel, Henry earl of Northumberland, the great chamberlain, Francis viscount Lovell, chamberlain of the king’s household, Sir Thomas Stanley constable, Richard Ratclyffe, knight of the king’s body, and William Catesby, esquire of the king’s body, and others of the council. And the chancellor received the seal enclosed in the bag, and carried it to his hospice in the parish of St. Andrews Holborn, and the seal thereafter remained in his custody. Fœdera XII, p. 203; Super Magno Sigillo Deliberando. [Calendar of Close Rolls, Edward IV, Edward V, Richard III: 1476-1485 (1954)]

At that time, the Star Chamber had not yet acquired its current reputation. Thanks to the Tudor regime, it now has grim associations as in Wikipedia’s brief description of it as “a notorious English court of law;” ”synonymous with social and political oppression through the arbitrary use and abuse of the power it wielded.” Perhaps it’s appropriate then that Wikipedia attributes it foundation to Henry VII. :-)

A more careful historian, A F Pollard in his article [“Council, star chamber, and privy council under the Tudors,” English Historical Review, vol. 37 (1922), p. 344.] mentioned the Star Chamber merely as the place of usual meeting for the king’s council before it had “foundered in the Wars of the Roses, owing to the incapacity of Henry VI, and it was Lancastrian partisans who wrecked the ship.”—

“This older council was a single body which usually met, when the king was at Westminster, in the star chamber, and there transacted its multifarious business. Commonly its clerk refers to it as a consilium, but sometimes as a curia. When its business was judicial, the judges, attorney, and serjeants-at-law generally participated, though it is difficult to draw any clear line between the occasions on which their presence was required and those on which it was not. In any case it was only their advice that was considered necessary.”

Pollard also stated “In all probability Edward IV did something (possibly at Fortescue’s instigation) and Richard III did more, to restore an organized council;…”

Since Pollard’s interest was in the Tudor incarnation of the king’s council, that seems to be all he has to say on the subject. I can’t resist, however, quoting his characterization of Henry Tudor’s large (100 give or take) number of councillors as including “all sorts and conditions of men, most of them without political influence or historical importance. Indeed, to judge by the Calendar of Patent Rolls the title ’ councillor ’ or ’ counsellor ’ seems as a rule to have been applied in Henry VII’s reign to men who held no high office, political, legal, or ecclesiastical. It is clear that the word ‘counsellors’ describes his civil service rather than his cabinet, and it is certain that these counsellors did not constitute a council, great or small.”

The earlier historian, Cora L Scofield, in the preparation of her thoroughly researched PhD dissertation published in 1900 (A Study of the Court of Star Chamber largely based on manuscripts in the British Museum and the Public Record Office) had discovered that the Star Chamber’s history extended at least as far back as the reign of Edward III. In its earlier incarnation, it was, as already noted, where the King’s Council met. The minutes of the Privy Council during the reign of Henry VI, for instance, show that their customary meeting place when sitting at Westminster was the Star Chamber.

Since records of the Privy Council do not survive for the reigns of the Yorkist kings, occasional references in other records need to be considered to determine their use of the Star Chamber. The few that Scofield found suggest that the Chamber continued to have a special association with the King’s Council.—  “Coke speaks of an exemplification of a complaint of Richard Heron against John Prout in 3 Edward IV, “coram rege & consiliariis suis in Camera Stellata” for a misdeameanor concerning wools. In the Star Chamber on 16 November, 7 Edward IV, the King ‘by thavise of his Counsail” commanded the Chancellor to make writs of proclamation under the great seal according to the intent of the bill of John, Lord Strange; and, in the eighth year of his reign, Edward sat in the Star Chamber with his Council and heard the cause of the Master and Brethren of St Leonard’s Hospital in Yorkshire against the inhabitants of some of the northern counties in regard to the right to a thrave of corn from each “Plow-land.” Again, in the thirteenth year of the same King, we hear that “en le sterre chamber deuant le counsaill le roy” it was debated whether, if one man bargained with another to carry certain bales and other things to Southampton, and then carried them to another place where he broke the bales and took the goods contained in them—whether this be felony or not; and in 20 Edward IV a decree was published in the Star Chamber for the Abbot of St Edmund’s-Bury against certain inhabitants of Bury for turbulent and unlawful elections.

During the reign of Edward V, there is a reference in the letter written by Simon Stallworth about the events of the week in which Lord Hastings was beheaded.

It seems that here Star Chamber is merely a straightforward indication of where Edward’s younger son met his uncle. I wonder, though, if it also implies that a meeting of the King’s council had been held, although the King (Edward V) seems then to have been at the Tower.

Scofield also noted that the Year Books of Richard III’s reign contain two interesting references to the Star Chamber. In Michaelmas Term, 2 Richard III, a Spanish merchant brought a bill “coram rege & Consilio in Camera Stallarum” against divers Englishmen, relating that he had been “depredatus & spoliatur” upon the sea near the coast of England and “per quemdam virum bellicosum de Britannia” had been deprived of a certain ship and the merchandise therein. And we learn also that, in the same term, the King summoned all the justices into the Interior Star Chamber, and there, in the presence of the Council, they gave their opinion in regard to certain matters about which the King questioned them. And in the Year Books of the first year of Henry VII it is recorded that Sir William Husee, the Chief Justice, addressing the justices in regard to the observance of the laws, said that when he was attorney to Edward IV all the Lords swore to observe the statutes, and then, an hour later, when they were in the “Star Chambre,” he saw some of those very men make retainments “per oath & serment” and do other things in direct violation of their oaths. From these allusions to the Star Chamber it may be gathered that that room was still frequently used by the Council during the Yorkist period. Indeed, the manner in which Chief Justice Husee spoke of it shows that the room was used for a specific purpose which would be well known to his hearers. It seems safe to conclude that he used the term Star Chamber as an equivalent for the King’s Council.

References to the room known as the Star Chamber, or Chamber of Stars, extend back to the year 29 Edward III, and the history of the statutory court which came to bear that name carries us through the period of the Tudors and the reign of James I down to the sixteenth year of the reign of Charles I. From the statute [Stat. 31 Hen. VI, c. 2.] are discovered the chief offences which the Council of Henry VI claimed the right to punish, as well as the process used by it, and although the statute was to endure but seven years, its influence is observable long afterwards in the process used by the Court of Star Chamber. The jurisdiction of the King’s Council was evidently a large and indefinite one, since “great riots, extortions oppressions, and grievous offences against the King’s peace and lawe” were terms which covered, or could be made to cover, a vast number of offences: and if with the accession of Edward IV the complaints against the Council ceased, it was not, we may rest assured, because the Council had seen fit to yield to the clamors of the past, but because the great power which it enjoyed under the Yorkist kings made complaint evidently useless.

Regarding the origin of the name for the chamber, Scofield listed and dismissed several theories, in particular one offered by Stow (and others) who stated in his Survey of London that it was so called ‘because the roofe thereof is decked with the likenesse of Starres guilt.”

The accompanying illustration - unfortunately featuring Henry VII - is said to come from a document of 1504 showing the king receiving various clerics in the Star Chamber.

The illustration may be found at this link: https://en.wikipedia.org/wiki/Star_Chamber#/media/File:Royal_Charity_Performance.jpg 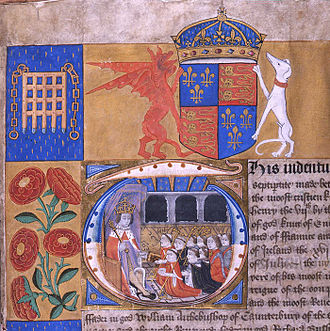